Creating a sheep farm has helped Mr Khosh provide for his family as well as meet other similar business owners and reconnect with his community.

Mr Khosh decided to leave Afghanistan for Europe due to the worsening economic situation in and around the area of Baghlan. He was unable to earn a living to support his family and the Taliban oppression in the region made it impossible for him to stay.

Mr Khosh and some of his fellow villagers travelled to Europe in late 2016, taking a route overland through Pakistan, Iran, Turkey then on to Greece, Macedonia and eventually arriving in Germany in early 2017. The journey was arranged by smugglers, and it cost them around 7000 US dollars each.

The journey was extremely difficult for them as they were mistreated by the smugglers, their money was stolen by thieves in Iran, and they suffered from hunger for most of their journey.

Once in Germany, life improved for Mr Khosh and he found shelter in a refugee camp and was provided with health care services and food. However back home in Afghanistan.

Mr Khosh’s mother became ill and after learning about the ERRIN programme and the assistance that IRARA could provide to help him reintegrate, he made the decision to return home to look after her.

Mr Khosh arrived back in Afghanistan in March 2020 and soon afterwards got married and he and his wife are now comfortably living with his mother.

He had experience in animal husbandry prior to travelling to Europe and so after discussions with the IRARA representatives and taking into consideration the market forces and the rural nature of his home region it was decided that the best use of his reintegration assistance would be to purchase a flock of sheep. He planned to produce sheep dairy products and wool to sell to local retailers as well as directly to people in the rural neighbourhoods. Producing and selling dairy products can be a lucrative business in the Baghlan province as hay and alfalfa (the staple feed for livestock) is very cheap and produced in large quantities. Mr Khosh knew of some good farmers in the region who he bought his sheep from and who he has now built up a good relationship with. These farmers have nurtured him in his farming endeavour and helped him to build his business and broaden his reach by travelling to other areas to sell his produce. The Afghan government are very supportive of rural businesses, so he hopes to benefit from further grants and assistance to grow the farm. 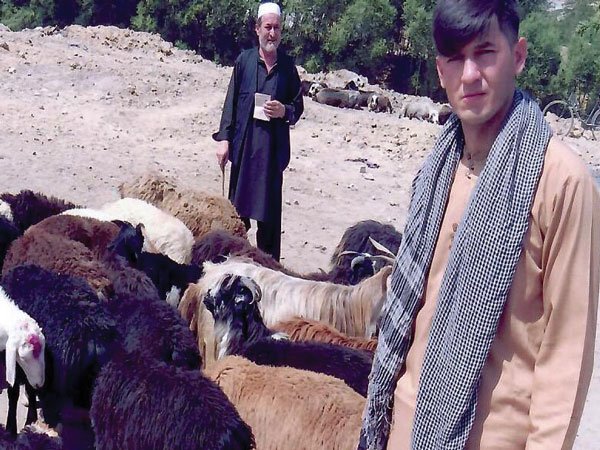 ‘I am happy with the assistance that I have been given by the IRARA representatives and the ERRIN programme as it is allowing me to provide for my wife and my mother.’