It is often difficult to make a living AND serve the community when you live in a rural place, but Mr Shirin Agha Niazi did just that with his poultry farm business.

A number of Mr Shirin’s family worked for the Afghanistan Government which lead to them being threatened and living in fear. This provoked his decision to leave Afghanistan in 2015 and after paying traffickers 7000 USD he travelled through Iran to Turkey, Bulgaria, Serbia and Hungary and finally reached Germany later that year.

His wife stayed behind in Afghanistan and after several years of trying but failing to find work and settle in Germany, he decided to return to Afghanistan in December 2019.

Mr Shirin moved back to his home village near Metarlam in the Laghman province in the East of Afghanistan which is a mostly rural area. Prior to leaving for Europe Mr Shirin worked in a poultry centre and after discussions with the IRARA counsellors, it was decided that the best use of his reintegration assistance would be to set up his own poultry farm. It was decided that selling eggs and hens would provide him with a higher profit margin than other livestock farming which he had initially considered. As well as this, the neighbouring villagers needed somewhere they could purchase their eggs and chickens from without having to travel to the main town, so Mr Shirin’s business would provide a much-needed local service.

The IRARA representatives also helped Mr Shirin navigate the requirements of the Ministry of Agriculture, Irrigation and Livestock (MAIL) helping him to apply for and receive his business license – often a lengthy administrative process which was made easier with this support.

Mr Shirin hopes to expand his enterprise in the future and breed more chickens in order that he can grow his yield and reach a wider customer base. 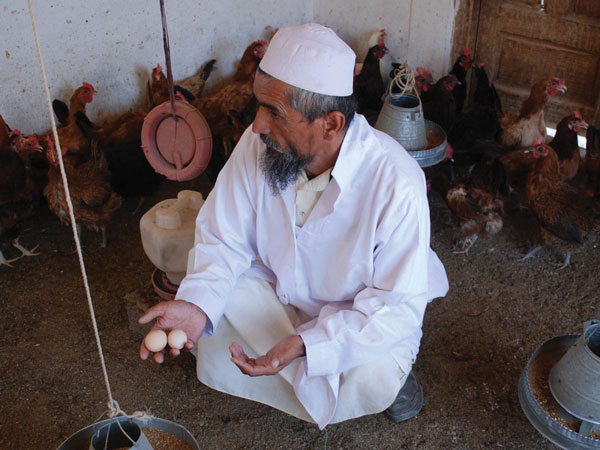 ‘It would have been nice to have the support provided in cash, however with this in-kind support I have been able to create a business which supports my family and provides a service for the local community. I am happy to have received this assistance.’